If you can't find what you're looking for here, give us a call and we will find it for you! Dismiss

Please note: Not all stock is kept on-site.

If you wish to make an in-store purchase, please confirm stock availability.

Looking for something else? Contact us via phone, email, or live chat!

(Orders placed after 12:00 on Friday will only be processed the next working day)

The Creality Ender 3 V2 is the latest upgrade of the extremely popular Ender 3 Pro. The Ender 3 Pro was the most widely sold printer in 2018 with over 200 000 units produced.

The Ender 3 V2 received a brand new user interface. The LCD screen is now a full colour screen with a modern housing. The heated bed was upgraded to be able to heat up in less than 5 minutes and the printing surface has been upgraded to silicon-carbide glass for an even more durable printing surface and stable temperature distribution. The controller board was redesigned to implement quieter printing, this reduces the movement of the printer to less than 50dB. The overall looks of the printer have been updated to present a more modern and sleek design and even a small drawer to store your tools and spares you use often.  A manual feed knob was added to the extruder to make feeding filament a breeze. Software to run the printer is included with the printer.

Add to wishlist
Out of stock

Add to wishlist
Out of stock 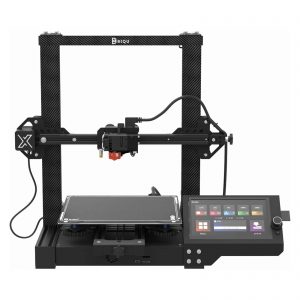